Public Organization “Ukrainian Center of Intellectual Development” (UCID), which was founded in 2005 is a non-political public organization for professional human rights activists, lawyers, experts, researchers, it was established to represent and to protect the legitimate social, economic, creative, cultural and other common interests of the inhabitants of the Ukrainian local communities.

UCID actively participates in various EaP cross-border programs and projects. For example, as of the Ukrainian lead partners, UCID realized  the project “Development of traditional crafts as a driver for SME and self-employment enhancement in the near-border communities” within Eastern Partnership Territorial Cooperation Program (EaPTC) and EU. This project has been started in December 2017 and will be going till the February 2019.

For the last 12 years UCID has successfully implemented 14 socially important projects with the support of international donors. Effects from these projects geographically cover the northern, central and southern  regions of Ukraine.

For the last years UCID realized the following projects:

1) 2017-2019. Project: “Development of traditional crafts as a driver for SME and self-employment enhancement in the near-border communities” within Eastern Partnership Territorial Cooperation Program (EaPTC), with the support of the EU and under the control of GIZ.

2) 2016-2018. Project: “Communication without borders: support by young volunteers the victims of National Socialism in Dnepropetrovsk and Kyiv regions, communication with youth and provision of humanitarian assistance” with the support of the EVZ Foundation, Germany.

3) 2017. Project “The spread of the successful practices of the activism in the local communities of the Kyiv region (Kyiv region).

5) 2014 – 2015. Project: “New Business Space: the Benefits of European Integration for the Local Business Community” (Kyiv, Zaporizhia, Mykolaiv and  Kharkiv regions) with the support of the Embassy of Great Britain in Kiev.

6)  2010. Project: “Free legal assistance for residents of the villages” with the support of the the Royal Netherlands Embassy in Ukraine, MATRa.

7) 2010-2011.Project: “To communicate – means to live!” (project to help victims of the totalitarian regimes) with the support of the All-Ukrainian charitable organization “Age concern in Ukraine” and EVZ (Germany).

8) 2010. Project: “Health and family – the choice of the Crimean Youth” supported by the USAID under the Program “Together for Health” (Project for improving family planning and reproductive health in Ukraine).

Moreover, the organization had more than 100 intellectual games in which it has been involved over 4000 young people.

Organization management performed by the Board, which includes 5 people. Head of the Board – Mykyta Shabanov. The Board also includes the Deputy Chairman of the Board and Treasurer.

On a regular basis UCID has 5 persons as a staff. Up to 19 people Involved in the projects. Number of volunteers is 150. 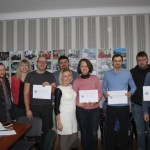 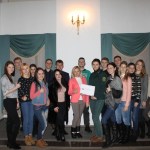